It’s a Tuesday evening in Westview, and inside Greens & Gravy, Mariah Carey’s “Heartbreaker” is blasting. In the tight space, the walls are hung with art celebrating black culture, including a painting of the Broadway Playbill for Your Arms Are Too Short to Box with God, and the crowd is nearing the room’s 33-person capacity. At one table, a group of 40-somethings who brought their own airline bottles of vodka are mixing drinks.

Holding a large pitcher of grape Kool-Aid, our waitress tells us her name is “Sarrrrrrrita,” and “if you can’t pronounce it, just yell, ‘Puerto Rico!’”

I tell her I want the Brussels sprouts.

“Do you want that with or without bacon?”

“Good,” she fires back. “I hate when people say ‘without bacon.’”

The brainchild of cookbook author and food star Darius Williams, whose Instagram and YouTube followers collectively top 381,000, Greens & Gravy is part of a restaurant and brewery boom southwest of downtown, centered along Ralph David Abernathy Boulevard and the BeltLine’s Westside Trail. When it opened in June 2017, Greens & Gravy joined a small handful of neighborhood staples including the cozy breakfast and lunch spot D Cafe. Since then, My Potato Factory across the street and Slutty Vegan next door have followed. Lean Draft House opened the same weekend as Greens & Gravy, about a half mile south in the West End and right on the BeltLine. A mile farther down the BeltLine, at the sprawling Lee + White development, the roster of businesses includes Honeysuckle Gelato, Doux South Pickles, Golda Kombucha, and Monday Night Brewing’s Garage. There are at least seven other notable concepts in the works nearby, including a barbecue spot from James Beard–nominated chef Todd Richards, who ran the wildly popular and now-defunct Rolling Bones BBQ on Edgewood Avenue and now operates Richards’ Southern Fried in Krog Street Market.

Williams says his goal with Greens & Gravy was to fill a void in the neighborhood by providing a “little swanky joint that served good fried chicken, good collard greens, and a little something different.” But he ended up being part of a larger resurgence of black-owned businesses. And while those businesses were built to cater to the community, they have even broader appeal.

“We all have our own unique followings,” Williams says of his fellow business owners, “so, what ends up happening is you bring in more people from outside the community into the community. People come from other parts of the city and the suburbs, and they’re like, ‘Oh, I didn’t know this was here.’”

When it set out to transform a site of largely abandoned warehouses and loading docks in the historically black neighborhood, the team behind Lee + White wanted to cultivate a different vibe than other mixed-use developments in town. Most of its tenants have deep Atlanta or Georgia roots. And, unlike at Ponce City Market along the BeltLine’s Eastside Trail, you won’t find a $20 hot dog or a $10 elevator ride to the roof. “What we wanted was to create something that we all—who live here 365—would want to use consistently,” says Lee + White co–managing partner Ben Hautt. “If we built a Williams-Sonoma, you and I would not go to it.”

Hautt says Lee + White worked with the nearby community, and many of its tenants hired locally. He and his partners attended NPU meetings and made decisions based on the input of local businesses and residents.

As to whether Lee + White is a gentrification catalyst in the fast-growing and fast-appreciating neighborhood, Hautt says community members “would tell you that we’re doing something they like and everyone can appreciate.”

“We’re here to make a statement that we can do this anywhere. We can make it safe, too.”

Jason Hudgins, president of the Westview Community Organization, moved to the area three years ago from East Atlanta Village and, along with Westview Retail Association president Kiyomi Rollins, has helped steer the commercial corridor’s comeback. He says that, on the other side of town, growth along the BeltLine’s Eastside Trail has been “more transactional,” centered on mixed-use and live-work destinations where out-of-town developers are looking to cash in on transplant incomes. Along the Westside Trail, on the other hand, development is more “relational,” with new businesses arising out of requests and input from the locals. “It’s all based on the needs of the neighborhood,” Hudgins says.

Chef Tonya Morris’s My Potato Factory was one of the first local businesses to take the burglar bars off the windows. Known to customers and locals as “Cheffy,” Morris lived off Lawton Street near West End Park for two years, right up until she opened her restaurant (she since moved to Douglasville but intends to return to the area). She started the build in January 2018 on her Subway/Chipotle-style baked potato shop, opening its doors that September. Morris remembers back in the day when that strip of Ralph David Abernathy was more or less left for dead. “Every black neighborhood doesn’t have to have all the bars and all the security,” she says. “We’re here to [make] a statement that we can do this anywhere. We can make it safe, too.”

Part of Morris’s mission with My Potato Factory is to provide the community with healthier options. She believes the 500 to 600 orders she serves per week are proof that residents are hungry for local options other than fast food. 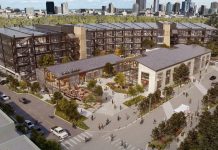