Home Restaurants Looking back, a review of 2013

As the saying goes, you win some, and you lose some. This year we saw famed mixologists leave their longtime outposts, award-winning chefs open new “it” spots, and the restaurant community band together to help one of their own. As we welcome in the new year, we pause to take a look back at what happened in 2013.

Everybody’s Pizza—in business since 1971—and adjacent Steady Hand Pour House shut their doors, making way for Slice & Pint. Carver’s Country Kitchen closes with plans to reopen in a new location on the Westside. Owner Sharon Carver later changes her mind and decides to sell the property.

April
Atlanta’s only rotating restaurant, the Sun Dial closes for renovations. It reopens in August with a new menu and updated interior.

May
Later named one of Atlanta’s Best New Restaurant, Kevin Gillespie opens Gunshow in Glenwood Park, proving that the churrascaria-dim sum method of serving can work in other types of restaurants. Ford Fry outdoes himself yet again with King + Duke’s wood-roasted meats and fish; and Fuyuhiko Ito (formerly of MF Buckhead) brings high-end sushi back to the area with the opening of Umi.

Despite an outpouring of social media support to keep it open, Aurora Coffee closes in Virginia-Highland. The Little Five Points location remains open.

June
The bottom level of the Brookwood building facing Peachtree Street is finally full, thanks to the opening of Saltyard. Here Atlantans congregate for small plates and wine, spilling out onto the restaurant patio when the weather is nice.

July
A kitchen fire breaks out at Rathbun’s, temporarily closing the restaurant. In another stroke of bad luck, an accident while investigating fire damage takes chef and proprietor Kevin Rathbun off of his feet for a few weeks.

After a 4th of July bash, the original Victory Sandwich Bar in Inman Park closes to make way for a mixed-use development. It will reopen in the old Park’s Edge location by April 2014.

August
Ryan Smith leaves Empire State South to focus his attention on the much-anticipated Staplehouse, where he’ll work alongside Ryan and Jen Hidinger as a partner.

HD1 closes with plans to turn the Poncey-Highland space into yet another Richard Blais concept, Flip Burger Boutique.

Helmed by executive chef Stephen Sharp, Ink & Elm brings fine dining to Emory Village. To cater to the masses, the restaurant is divided into a dining room, tavern, lounge, and raw bar.

October
One year after Ford Fry’s the Optimist wins 2012 Restaurant of the Year by Esquire Magazine, Fry’s newest spot, King + Duke, is named one of Esquire’s Best New Restaurants of 2013.

November
Live jazz and fondue spot Dante’s Down the Hatch is demolished after closing July 31. The pirate ship-shaped restaurant had been open through four decades, multiple locations, and thousands of special occasion celebrations.

Athens soul food institution Weaver D’s shutters. The restaurant had been “rescued” by its fans once before, but this time nothing could solve the twenty-seven-year-old restaurant’s financial problems.

The Georgia Restaurant Association celebrates Steve Nygren and Ford Fry for their commitment to local foods at the 2013 GRACE Awards.

Legendary chef Ria Pell, owner of Ria’s Bluebird, passes away. Chefs and diners alike mourn the loss while celebrating her impact on the Grant Park community. 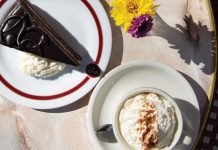 As a student, Cafe Intermezzo meant the world to me